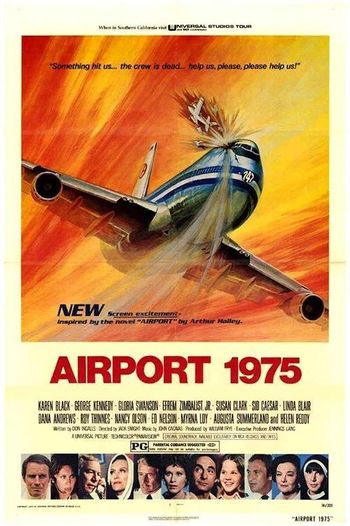 When a midair collision with a light plane leaves a 747 without a pilot and with a massive hole in the front it falls to the Chief Stewardess to fly the plane safely, aided over the radio by her lover who is an expert pilot. To land the plane safely a daring mid-air aircraft to aircraft rescue is attempted to get a qualified pilot on board the 747.

This plane plays the part of Flight 409 flying from Dulles International Airport (IAD/KIAD) to Los Angeles International Airport (LAX/KLAX). It is struck in mid-air by a light aircraft killing the co-pilot and first officer. In the colours of the made for movie carrier Columbia Airlines this plane was rented for filming from American Airlines. Registration N9675. C/N 20390. This aircraft also saw service with TMA Cargo of Lebanon and UPS.

The light plane that strikes flight 409 when its pilot Paul Freeman suffers a heart attack.
Registration N9750Y, serial no.TC431. This plane later had a real mid-air collision in 1989.

Exec 1 the Columbus Airlines Executive jet that is used by Alan Murdock and Joe Patroni to fly to Salt Lake City Airport (SLC/KSLC).
Reputedly registered N1972L Learjet 24A c/n 24A-096 which later switched to N464CL. If right, this aircraft is seen in several other movies (IMPDb: Frequently Seen Aircraft).

Jet seen in the background from the bar at Dulles International Airport (IAD/KIAD). In the livery of Northwest Airlines.

Aircraft seen in pictures on the wall of Joe Patroni's office. Easily distinguishable, a Ford Trimotor (top) and a Douglas C-47 Skytrain (down).