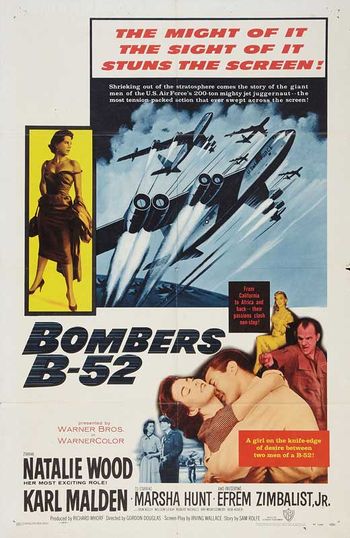 A Line Chief dislikes his commanding officer and this climaxes when the Lieutenant Colonel flirt with his daughter. Will the proposal of a more lucrative job in a private company and the arrival of the new B-52 kept him in the Air Force or not ?

With the checkerboard of 51st Fighter Interceptor Wing.

Only five pilots of 51 FIW scored seven (or more) kills.

Probably F-86E-10 51-2793 (if right, it worn in Korea a small shark mouth and was baptised "Jackies Jag" instead Lucky Lady as shown in the movie).

A Thundestreak is playing a Mig 15 during a dogfight over Korea.
Same aircraft in other movies at IMPDb: Frequently Seen Aircraft.