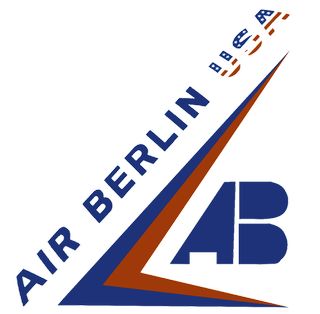 Air Berlin USA was founded in 1978 as a wholly owned subsidiary of Lelco, an American agricultural enterprise headquartered in Oregon, to operate charter flights on behalf of German tour operators from Berlin Tegel Airport, mostly to Mediterranean holiday resorts. As a US airline, Air Berlin USA was able to access the West Berlin airline market. During the Cold War, Berlin's special political status meant that the air corridors into and out of Tegel Airport could only be used by airlines registered in France, the United Kingdom or the United States. The airline's headquarters were initially at Tegel Airport.
German reunification led to significant changes to the European aviation market, and in particular in Berlin: German airlines now gained access to the city. In 1991, Air Berlin USA (which had 90 employees at the time)[22] was restructured as Air Berlin GmbH & Co. Luftverkehrs KG, a German-registered company, with several German investors joining Kim Lundgren, the original founder, thereby bringing the ownership in line with German foreign-control requirements. Joachim Hunold, a former sales and marketing director with LTU International, now led the company.