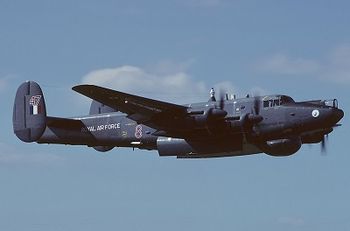 The Avro Shackleton was a British long-range maritime patrol aircraft for use by the Royal Air Force (RAF) and the South African Air Force (SAAF). It was developed by Avro from the Avro Lincoln bomber, itself being a development of the famous wartime Avro Lancaster bomber. The type is named after the polar explorer Sir Ernest Shackleton. Entering service with the RAF in 1951, the Shackleton was used primarily in the anti-submarine warfare (ASW) and maritime patrol aircraft (MPA) roles; it also became used as a search and rescue (SAR) platform and for performing several other secondary roles such as being a troop-transport. In later life, a small number of the RAF's Shackletons were subsequently adapted for airborne early warning (AEW) duties, performing in this capacity until the type's retirement in 1990. The Shackleton was also procured by South Africa, and would be operated by the SAAF between 1957 and 1984. 185 were built.

This page lists all films, TV series, and video games that feature the Avro Shackleton.