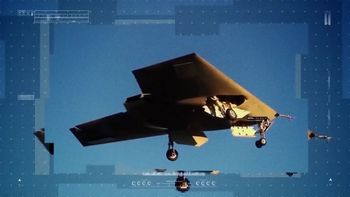 BAE Systems Taranis seen in Do You Trust This Computer?.

The BAE Systems Taranis is a British demonstrator programme for unmanned combat aerial vehicle (UCAV) technology. Its first flight occured on 10th August 2013 and to date a single airframe was built and tested. It has two internal weapons bays and will carry a variety of weapons, enabling it to attack both aerial and ground targets. The Taranis is designed to fly intercontinental missions using stealth technology, giving it a low radar profile. It will be controllable via satellite link and is intended to incorporate "full autonomy", allowing it to operate without human control for a large part of its mission. The Taranis is planned to be operational "post 2030" and used in concert with manned aircraft. As of 2016 BAE Systems and UK MoD were in discussions about a fourth series of flight tests.

This page lists all films that feature the BAE Systems Taranis.