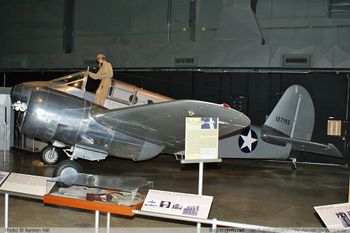 The Beechcraft AT-10 Wichita was a light twin engine aircraft used to train USAAF pilots for multi-engined aircraft. The first prototype flew on 19th July 1941. Production was stopped at the end of 1943 in Wichita (Beechcraft's production line) and some months later for the licensed airframes.
Please, do not confuse with Cessna Bobcat which has a similar shape.

This page lists all films that feature a variation of the Beechcraft AT-10 .

Pages in category "Beechcraft AT-10 Wichita"