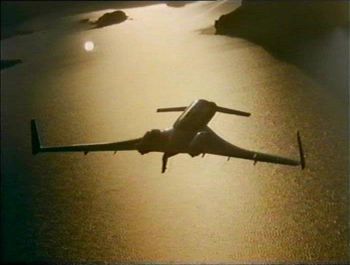 The Beechcraft Starship is a twin-turboprop canard design, lack of centrally located vertical tail, and pusher engine/propeller configuration. The use of massive carbon fiber composite parts and elements made the development phase more complex than scheduled and led to a long study / testing time with the first production aircraft flying (in 1989) ten years after the start of the design. Able to carry six to eight passengers and think to replace the King Air, the sales were only at a very low rate. Production ceased in 1995 and led to Beechcraft scrapping the unsold airframes from 2003. As of January 2010, nine Starships hold an active registration with the FAA.

Only 53 airframes were built and most deleted by lack of buyers.

This page lists all films that feature the Beechcraft Starship.