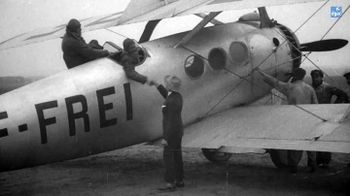 The Bleriot-SPAD S.33 was a small French airliner developed soon after World War I. The aircraft was a biplane of conventional configuration whose design owed much to the Blériot company's contemporary fighter designs such as the S.20. Four passengers could be accommodated in an enclosed cabin within the monocoque fuselage, and a fifth passenger could ride in the open cockpit beside the pilot. A great success, the S.33 dominated its field throughout the 1920s, initially on CMA's Paris-London route, and later on continental routes serviced by Franco-Roumaine.

One interesting development was a sole example converted by CIDNA to act as a blind-flying trainer. A set of controls was installed inside the passenger cabin, the windows of which had been blacked out.

This page lists all films that feature the Blériot-SPAD S.33.