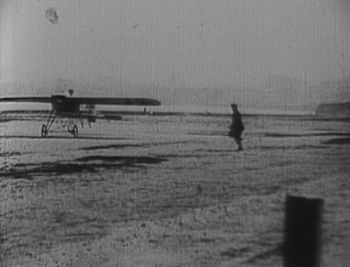 Blériot XI seen in The Story of Aviation.

The Blériot XI is the aircraft that was used by Louis Blériot on 25 July 1909 to make the first flight across the English Channel made in a heavier-than-air aircraft. This achievement is one of the most famous accomplishments of the early years of aviation, and not only won Blériot a lasting place in history but also assured the future of his aircraft manufacturing business. The Blériot XI, designed by Raymond Saulnier, was a development of the Blériot VIII which Blériot had flown successfully in 1908.

This page lists all films that feature the Blériot XI.