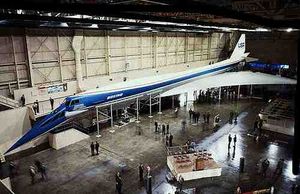 The Boeing 2707 was developed as the first American supersonic transport (SST). After winning a competition for a government-funded contract to build an American SST, Boeing began development at its facilities in Seattle, Washington. The design emerged as a very large aircraft with seating for 250 to 300 passengers and cruise speeds in the range of Mach 3. This made it much larger and significantly faster than competing designs like the Concorde. Rising costs and the lack of a clear market led to its cancellation in 1971 before two prototypes had been completed.

This page lists all films that feature the Boeing 2707.