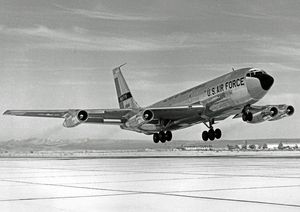 The Boeing C-135 is a family of transport and mission aircraft operated primarily by the U.S. Air Force. The base version is the C-135 Stratolifter derived from the Boeing 367-80 airliner. The majority of aircraft were produced in the Boeing KC-135 Stratotanker configuration as an aerial refuelling aircraft with some maintaining their original role as transport aircraft, including VIP transport as Boeing C-137 Stratoliner. Some have also been modified for electronic, reconnaissance and atmospheric observation aircraft.

This page lists all films that feature a variation of the Boeing C-135.