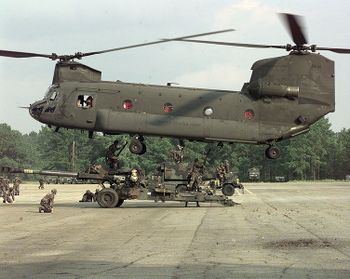 Boeing CH-47 Chinook in use by the U.S. Army

The Boeing Chinook is a twin-engined, tandem rotor, heavy-lift helicopter, primarily in use by the U.S. Army. Known under various designations such as CH-47 and HC-1B, the Chinook has been in service for over 40 years and is still in production. The versatility of the helicopter enables cargo and troop transport, battlefield resupply, medical evacuation and specialist heavy-lift operations. The civilian model is the Boeing-Vertol 234.

This page lists all the films which feature a variation of the Boeing Chinook.