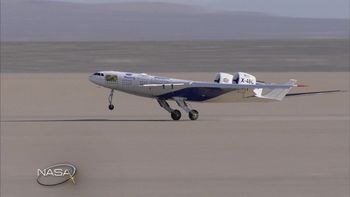 The Boeing X-48 is an American experimental unmanned aerial vehicle (UAV) built to investigate the characteristics of blended wing body (BWB) aircraft, a type of flying wing. Boeing designed the X-48 and two examples were built by Cranfield Aerospace in the UK. Boeing began flight testing the X-48B version for NASA in 2007. The X-48B was later modified into the X-48C version, which was flight tested from August 2012 to April 2013. Boeing and NASA plan to develop a larger BWB demonstrator.

This page contains all films, TV series, and video games that feature the Boeing X-48.