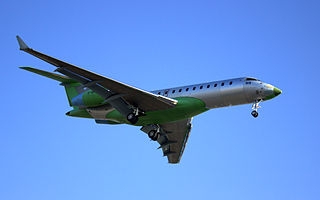 The Global Express shares the Bombardier CRJ100/200's fuselage cross section and is similar in length, but features an advanced all new supercritical wing with a 35° sweep and winglets, plus a new T-tail. It can carry 8 passengers in a typical configuration, up to 19 in high density arrangement. After a first flight on 13 October 1996, at least 500 airframes have been built (summer 2013), some of them for military tasks (VIP transport; Battlefield Airborne Communications Node (4 airframes for the USAF) or Surveillance aircraft (RAF)).

This page lists all films that feature a variation of the Bombardier Global Express (BD-700; Global 5000/6000 and military variants : Northrop Grumman E-11A (USAF) and the 5 Raytheon Sentinel R1 (RAF)).