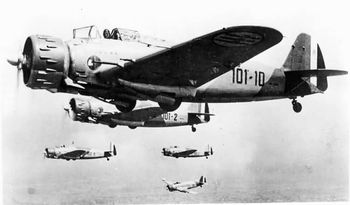 The Breda Ba.65 was an Italian all-metal single-engine, low-wing monoplane used by Aviazione Legionaria during the Spanish Civil War and Regia Aeronautica in the first part of World War II. It was the only Italian ground-attack aircraft that saw active service in this role. It saw service almost exclusively on the North African front. In addition to more than 150 aircraft operated by the Italian forces, a total of 55 were exported and used by the air forces of Iraq, Chile and Portugal.

This page contains all films, TV series, and video games that feature the Breda Ba.65.