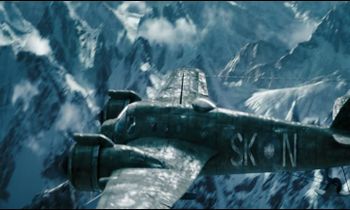 Bristol 156 Beaufighter Mk.IC seen in The Mummy: Tomb of the Dragon Emperor.

The Bristol Aeroplane Company draw the Blenheim in the mid thirties then developed a derivative torpedo bomber as the Beaufort (type 152). Just before the begining of the conflict in Europe, a new study led to the type 156 known as Beaufighter. This new design which omited the bomb bay (in favor of four forward-firing 20 mm Hispano Mk III cannons) and the rear firing gunner as well as the bomb-aimer, entered in service during the summer 1940. New Hercules engines gives the two crew airplane the specifications ideal to a night fighter which pleased the USAAF in North Africa, awaiting the arrival of the P-61 Black Widow (and even after). Quickly a Coastal Command variant modified to carry bombs was developed. The shortage of Hercules (due to high priority in favor of the Stirling) led to Rolls-Royce Merlin XX-powered marks. The success of the airframe was greater with the further variants which were fitted with a turret with four 0.303 in (7.7 mm) machine guns and used airborne radar or torpedoes or aircraft rockets depending their role, allowing them to see action in Europe and the Mediterranean theater also in South East Asia and South Pacific.

A grand total of nearly 6 000 were built and a great number were converted for target towing duties, their last role they kept for the RAF until 1960.