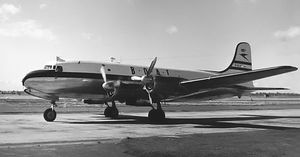 The Canadair North Star was a 1940s Canadian development of the Douglas C-54 Skymaster / Douglas DC-4 aircraft. Instead of radial piston engines found on the Douglas design, Canadair employed Rolls-Royce Merlin engines in order to achieve a 98 mph faster cruising speed. The prototype flew on 15 July 1946 and the type was selected by various airlines as well as by the RCAF. It provided reliable, if noisy, service throughout the 1950s and into the 1960s. Some examples continued to fly into the 1970s as converted cargo aircraft. Canadair built 71 examples under the designations: North Star, DC-4M, C-4 and C-5. With the exception of the single C-5 (which had Pratt & Whitney R-2800 engines, as fitted to the Douglas DC-6), these variants were all powered by Rolls-Royce Merlin engines and 51 of the production examples were pressurized.

This page lists all films that feature the Canadair North Star.