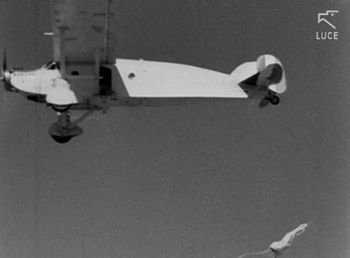 The Caproni Ca.133 was was a three-engined transport/bomber aircraft used by the Italian Regia Aeronautica from the Second Italo-Abyssinian War (1935) until World War II. Its high wing was made of wood and steel. The undercarriage was spatted and fixed. Two of the engines were mounted in faired nacelles under each wing, supported by steel tubes. It was a robust and inexpensive aircraft, designed to be easily maintained in difficult conditions which led it to serve until 1948.

This page lists all films that feature a variation of the Caproni Ca.133 (including the civilian Ca. 148 with eight seats).