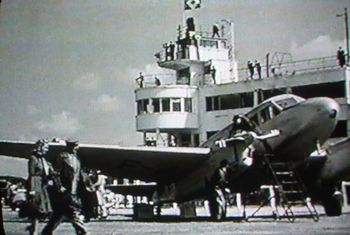 The Caudron C.440 Goéland (seagull) was a six-seat twin-engine utility aircraft developed in France in the mid-1930s. Apart from private buyers, the C.440 was also bought by the Armée de l'Air, Aéronavale, Aéromaritime, Règie Air Afrique and Air France, and some were exported for service with Aeroput. Production of the C.440 and its subtypes continued until the outbreak of World War II, at which time many C.440s were impressed into military service. Following the fall of France, some were operated by the German Luftwaffe and Deutsche Luft Hansa. Another user was the Slovenské vzdušné zbrane - it ordered 12 aircraft as the C.445M in 1942.Production was restarted following the war for both military and civil use as a transport and as a twin-engined trainer. In the post war reorganisation of the French aircraft industry, Caudron became part of SNCA du Nord, and the aircraft became the Nord Goeland; 325 of these were built. Post-war commercial operators included Air France, SABENA, Aigle Azur, and Compagnie Air Transport (CAT).

This page lists all films that feature the Caudron Goéland.