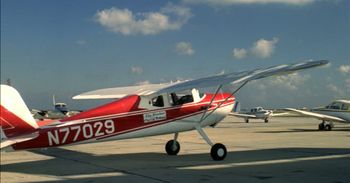 The Cessna 120 and the Cessna 140 are single engine, two-seat, conventional landing gear, light general aviation aircraft that were first produced in 1946, immediately following the end of World War II. Production ended in 1950, and was succeeded by the Cessna 150, a similar two-seat trainer which introduced tricycle gear. Combined production of both aircraft was 7,664 units in five years.

This page lists all films that feature the Cessna 120/140.