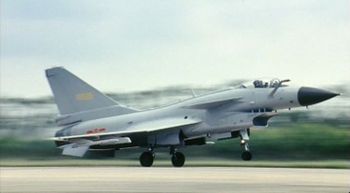 The Chengdu J-10 is fourth generation fighter designed during the 1980's. With a secondary role as strike mission, this tail-less canard delta wing aircraft is powered by a single Lyulka-Saturn AL-31FN turbofan engine. This Russian engine was the subject of tension with China which asked without success for a licence; Russia was only kind to sell 300 units. The cockpit (with a zero-zero ejection seat under a bubble canopy) has a screen displaying data from the Russian Phazotron. But Russia didn't gave a licence and eventually it's the Chinese Type 1473H pulse-doppler fire control radar. The first full sized airframe was completed in 1993 and the first flight was done on 23 March 1998 but operational unit received the J-10 only on February 2003. The maiden flight of the biplace variant (the J-10S) occured the same year and in 2006, an upgrade J-10B (with a new air intake as main visual difference) was put in production.

More 400 airframes have been rolled-out.

This page lists all films that feature the Chengdu J-10.