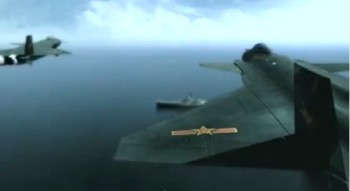 The Chengdu J-20 is a fifth-generation, stealth, twin-engine fighter aircraft prototype developed by the Chengdu Aircraft Industry Group for the Chinese People's Liberation Army Air Force (PLAAF). The J-20 made its first flight on 11 January 2011 and only two protoypes are built at the end of 2012. It is expected that the J-20 should be operational before the end of this decade.

This page lists all films that feature the Chengdu J-20.