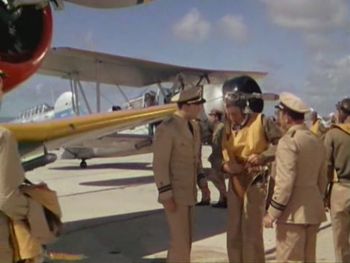 The Curtiss SOC Seagull was a United States single-engined scout observation biplane aircraft, designed by Alexander Solla of the Curtiss-Wright Corporation for the United States Navy. The aircraft served on battleships and cruisers in a seaplane configuration, being launched by catapult and recovered from a sea landing. The wings folded back against the fuselage for storage aboard ship. When based ashore or on carriers the single float was replaced by fixed wheeled landing gear. Curtiss delivered 258 SOC aircraft, in versions SOC-1 through SOC-4, beginning in 1935. The SOC-3 design was the basis of the Naval Aircraft Factory SON-1 variant, of which the NAF delivered 64 aircraft from 1940.

This page lists all films that feature the Curtiss SOC Seagull.