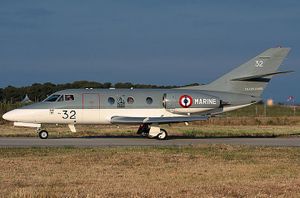 The Dassault Mystère/Falcon 10 is an early corporate jet developed after the Falcon 20, and basically a scaled down version of that aircraft. Production began in 1971 and ceased in 1989 but it remains a popular business jet on the used market.

This page lists all films that feature a variation of the Dassault Falcon 10.