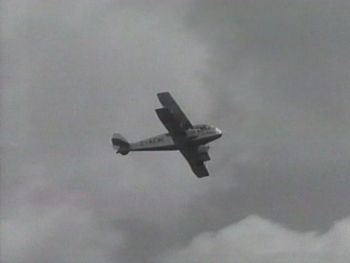 The de Havilland DH.84 Dragon was a successful small commercial aircraft designed and built by the de Havilland company. It was originally designated the DH.84 "Dragon Moth" but marketed as the "Dragon". The prototype first flew at Stag Lane Aerodrome on 12 November 1932. British production of the DH.84 ended at the 115th aircraft, when it was replaced on the assembly line by the more powerful and elegant De Havilland DH89 Dragon Rapide. However, during World War II the DH.84 was put back into production at Bankstown, Australia as a navigational trainer for the RAAF, being preferred to the Rapide because its smaller engines were then being manufactured locally for De Havilland Tiger Moth production. A further 87 were built, for a total of 202 produced.

This page lists all films that feature the De Havilland DH84 Dragon.