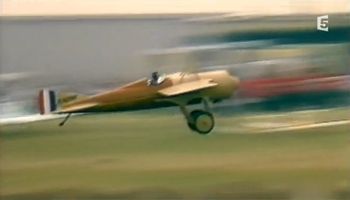 A 1980 replica of the Deperdussin Monocoque seen in Ep. 9.03 of Dangers dans le ciel.

At a time when aircraft's fuselages were just tubes and sometimes some cover, ingenior Louis Béchereau used a structural approach whereby loads are supported through the object's external skin, similar to an egg shell. The technique may also be called structural skin. In french, this gives the name Monocoque and then the name of this aircraft, the first of the type in France. The fuselage constructed by building up several layers of thin wood, each lamination being applied at right angle to the one underneath was linked to wings of the monoplane formula. They were different to ease sharp turns during races. The type raised the world speed record for aircraft to 130 mph (210 km/h) then was the winner of the Gordon Bennett Trophy in 1912 and 1913. At least four airframes were built and used for races.

This page lists all films that feature a variation of the Deperdussin Monocoque.