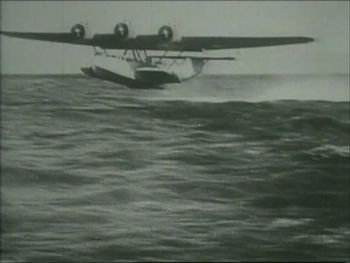 Dornier Do 24 seen in Great Cars.

The Dornier Do 24 was a German flying boat which made its first flight on 3 July 1937. Its design was launched to meet a Dutch navy requirement for a replacement of the Dornier Wals. Its layout was a parasol monoplane with a broad-beamed hull and stabilising sponsons, twin tails mounted on the upswept rear of the hull, while three wing-mounted tractor configuration engines. It was used by the Netherland in the West Indies, Australia (when some of the Dutch flying boats fled Japanese troops), the German Luftwaffe, France (during nine years from Fall 1944) and Spain. The Spanish Do 24s were used in SAR tasks until the end of the 1960's.
During the 80's, a former Spanish airframe (c/n 5345) was rebuilt in a new configuration with three turboprop engines, a new wing and a landing inside new stabilising sponsons. This Do 24 ATT is stil flying today.

This page lists all films that feature a variation of the Dornier Do 24.

Pages in category "Dornier Do 24"