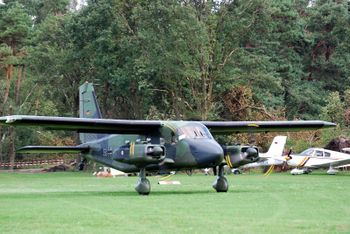 The Do 28 was developed from the single-engine Do 27 at the end of the 1950s. The design shared the high-wing cantilever layout and the lift augmentation devices of the Do 27, together with the rear fuselage which seated six passengers. The most defining feature of the new aircraft was the unusual incorporation of two engines, as well as the two main landing gear shock struts of the faired main landing gear attached to short pylons on either side of the forward fuselage.

This page lists all films that feature a variation of the Dornier Do 28.

Pages in category "Dornier Do 28"