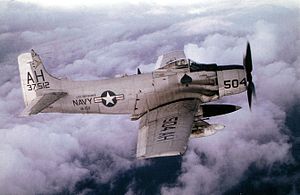 The Douglas A-1 (formerly AD) Skyraider was an American single-seat attack aircraft that saw service between the late 1940s and early 1970s. It became a piston-powered, propeller-driven anachronism in the jet age, but had a remarkably long and successful career due to excellent low-speed maneuverability, and ability to carry a tremendous amount of ordnance over a considerable combat radius and loiter time for its size, comparable to much heavier subsonic or supersonic jets.

Several versions of the Skyraider were operated by USAF, US Navy, US Navy Corps, British Royal Navy, French Aéronavale and many countries air forces.

This page lists all films that feature a variation of the Douglas A-1 Skyraider.

Pages in category "Douglas A-1 Skyraider"