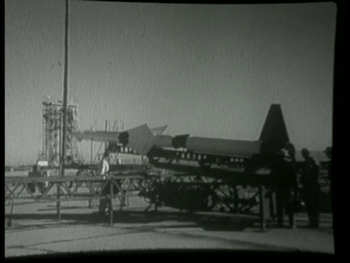 Douglas MIM-3 Nike Ajax seen in A Century of Flight: 100 Years of Aviation.

The MIM-3 Nike Ajax was the result of cooperation between Douglas Aircraft which provided the missile airframe and carried out aerodynamic studies when Bell Labs was in charge of the whole system. Bell Aircraft provided a liquid fuel rocket for the upper stage when a solid fuel rocket booster powered the launch. First static firing testings occured on autumn 1946, few months after the first flight of the Bell X-1. Production was launched in August 1952 and the system became the world's first operational surface to air missile in 1954. Designed to attack conventional bomber aircraft flying at high subsonic speeds and high altitudes, Nike Ajax suffured some limitations so a derivative design became the more powerful Nike Hercules. But technological development during the 1950s quickly rendered Nike obsolete. During the 1970's, most of the unused booster ended their life as sounding rocket.

This page lists all films that feature a variation of the Bell / Douglas MIM-3 Nike Ajax or Hercules.