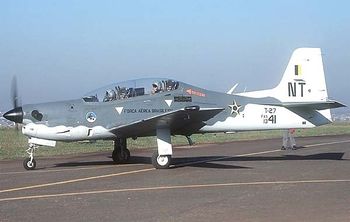 The Embraer EMB 312 Tucano is a low-wing tandem-seat single-turboprop basic trainer which made its first flight on 16 August 1980. Commissioned by the Brazilian Air Force which named them Tucano T-27 or Tucano AT-27 for the two-seat light attack variant, the EMB 312A was derivated into EMB 312S license built by Short (132 airframes built as Tucano T1 for the RAF, 12 Tucano Mk.51 for the Kenya and 16 Tucano Mk.52 for the Kuwait) and EMB 312F (50 aircrafts used between 1994 and 2009 by France). A further development led to the EMB 314 Super Tucano dedicated to the attack role.

This page lists all films that feature the Embraer EMB 312 Tucano / Short Tucano.