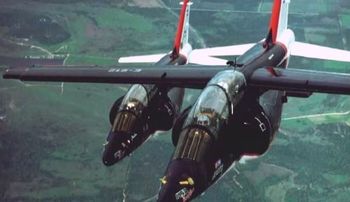 The FMA IA 63 Pampa is an advanced trainer aircraft with combat capability, produced in Argentina by Fabrica Militar de Aviones (FMA). Despite it's usually compared with the Dassault-Dornier Alpha Jet, it's a different aircraft built with the help of Dassault-Dornier but the wing is straight and the airframe is powered by a single Garrett turbofan.

Sources are not consistent about the number of FMA IA 63 Pampa built (but it's lesser than 30).

This page lists all films that feature a variation of the FMA IA 63 Pampa.