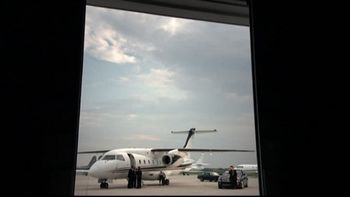 The Fairchild Dornier 328JET is a commuter airliner based upon the turboprop-powered Dornier 328. A proposed stretched variant was the 428JET. The 328 was designed and placed into initial production by the German aerospace firm Dornier Luftfahrt GmbH, but in 1996 that firm was acquired by the United States aerospace company Fairchild Aircraft. The resulting corporation, named Fairchild Dornier, continued the production of the 328 family in Oberpfaffenhofen, Germany, conducted sales from San Antonio, Texas, and supported the product line from both locations. A total of 110 have been built.

This page lists all films, TV series, and video games that feature the Fairchild Dornier 328JET.