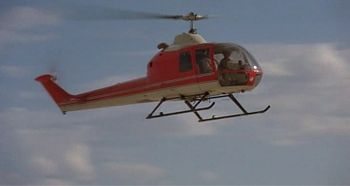 The Fairchild Hiller FH-1100 is a single-engine, single two-bladed rotor, light helicopter which began as a design entry into United States Army's Light Observation Helicopter program. The Hiller Model 1100 was not selected but after Hiller Aircraft was purchased by Fairchild Stratos in 1964, the Model 1100 was successful marketed as a civilian helicopter, the FH-1100.

This page lists all the films which feature a variation of the Fairchild Hiller FH-1100.