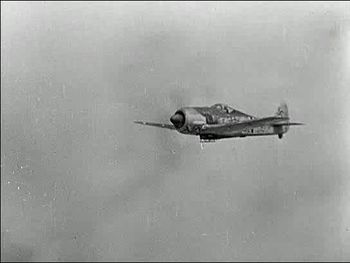 The Focke-Wulf Fw 190 was a German Second World War single-seat, single-engine fighter aircraft designed by Kurt Tank in the late 1930s. Powered by a radial engine, the 190 had ample power and was able to lift larger loads than its well-known counterpart, the Messerschmitt Bf 109. The 190 was used by the Luftwaffe in a wide variety of roles, including day fighter, fighter-bomber, ground-attack aircraft and, to a lesser degree, night fighter. Operated by Luftwaffe and some air forces of the German allies. Over 20000 airplanes have been built.

This page lists all films that feature the Focke-Wulfe Fw 190.