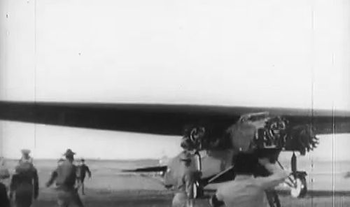 The Fokker F.10 was an enlarged version of the Fokker F.VII airliner, built in the late 1920s by the Fokker Aircraft Corporation of America. It carried 12 passengers, four more than the F.VII, and had a larger wing and more powerful engines. Fokker built 65 for U.S. commercial and military service. After the crash of TWA Flight 599 in 1931, which was caused in part by the deterioration of the wooden structure in the F.10's wing, the type was temporarily grounded, and it was required to undergo more frequent and rigorous inspection and maintenance. Its public image was also greatly damaged, leading to its early retirement from U.S. airlines.

This page lists all films that feature the Fokker F.10.