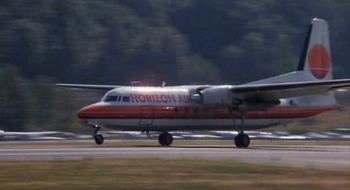 A Fokker F27 Friendship in WarGames.

The Fokker F27 Friendship is a 28-seat, twin-turboprop, high wing airliner. It first flew in 1955 and over 500 were produced plus another 200 F-27s and FH-227s in the USA by Fairchild. More than any other western European civil turboprop airliner, the F27 was a fair success as replacement of the Douglas DC-3. In the early 1980s, Fokker developed a successor to the Friendship, the Fokker 50/60. Although based on the F27-500 airframe, the Fokker 50 is virtually a new aircraft with Pratt & Whitney Canada engines and modern systems. Its general performance and passenger comfort were improved over the F27.

This page lists all films that feature a variation of the Fokker F27 Friendship.

The following 92 pages are in this category, out of 92 total.