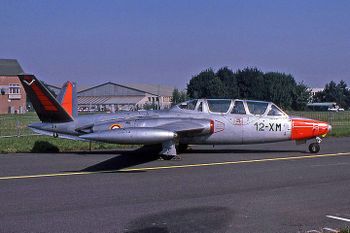 The Fouga CM170 Magister was a jet-aircraft designed by Fouga & Cie in the early 50’s after a French Armée de l’Air request for a military trainer. In 1954 it was adopted by NATO as basic training aircraft and as such many air forces operated as Fouga built or under local licenses: German Federal Republic, Belgium, Finland, Austria, Israel and many other countries. Its good performance led to it also being used for aerobatic teams of several countries, such as the Patrouille de France who operated it for 24 years. A French navy version for the Aéronavale was also developed as CM175 Zéphyr.

Though Fouga & Cie was aquired by Potez in the late fifties, later bought by Sud Aviation and later Aérospatiale in the late sixties however most of production remains under Fouga name. About 1000 aircraft were produced.

This page lists all films that feature a variation of the de Fouga CM170 Magister.