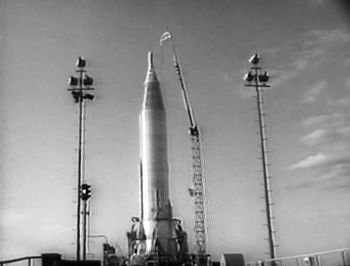 General Dynamics/Convair SM-65 Atlas seen in A Decade to Remember: The 1960's.

The SM-65 Atlas was the first intercontinental ballistic missile (ICBM) developed and deployed by the United States. It was built for the U.S. Air Force by Convair Division of General Dynamics at the Kearny Mesa assembly plant north of San Diego, California. Atlas became operational as an ICBM in October 1959 and was used as a first stage for satellite launch vehicles for half a century.

Though never used for its original purpose as a weapon, the Atlas was used by the NASA as the expendable launch system with both the Agena and Centaur upper stages for the Mariner space probes used to study Mercury, Venus, and Mars (1962–1973); and to launch ten of the Mercury program missions (1962–1963). Atlas saw the beginnings of its "workhorse" status during these Mercury-Atlas missions, which resulted in Lt. Col. John H. Glenn Jr. becoming the first American to orbit the earth on February 20, 1962 (Major Yuri A. Gagarin, a Soviet cosmonaut, was the first human in orbit on April 12, 1961.) Atlas was also used throughout the mid-1960s to launch the Agena Target Vehicles used during the Gemini program.

This page lists all films that feature a variation of the General Dynamics/Convair SM-65 Atlas.