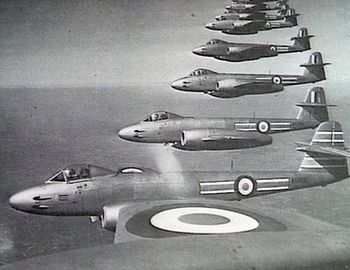 Gloster Meteor seen in The Story of Aviation .

The Gloster Meteor was the first British jet fighter and the Allies' first operational jet. It first flew in 1943 and commenced operations on 27 July 1944 with 616 Squadron of the Royal Air Force (RAF). The Gloster Meteor was not an aerodynamically advanced aircraft but the Gloster design team succeeded in producing an effective jet fighter that served the RAF and other air forces for decades. Meteors saw action with the Royal Australian Air Force (RAAF) in the Korean War, and remained in service with numerous air forces until the 1970s.

This page lists all films that feature the Gloster Meteor.