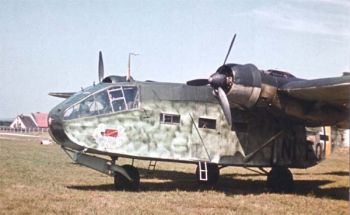 The Gotha Go 242 was a german twin boom glider capable of carrying 20 fully laden troops or the equivalent cargo (for example : a Kübelwagen). Most saw service in the Mediterranean, North Africa and Aegean, being towed by a Heinkel 111 or a Junkers Ju 52. Later, a strengthened Ju 87D-2 was used in the towing role and a hundred Gotha Go 242s were converted into Gotha Go 244, a twin engine powered airframe.

This page lists all films that feature a variation of the Gotha Go 242/244.