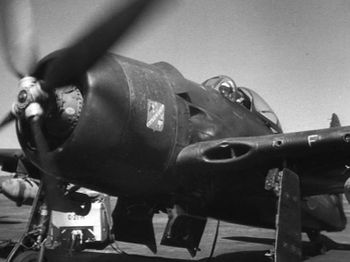 The Grumman F8F Bearcat was a single-engine naval fighter aircraft which flew for the first time on 21 August 1944. Due to the end of World War 2, only 1,265 were built which served with U.S. Navy and U.S. Marines Corps before a batch of 200 were supplied to France which used them in Indochina where the type saw combat for the first time in 1951. Once the Vietnam split in 1954, South Vietnam got a small batch of 28 and Thailand put on duty some airframes too. They were the last written off, in 1961. Actually, second hand, privatly owned Bearcats found a new life in the USA as racers. Despite their relatively low number built airframe, its high performance and career mainly away off the front line (even if some units used them in Korea), the type is now well preserved with nearly 15 flyable airframes.

This page lists all films that feature the Grumman F8F Bearcat.