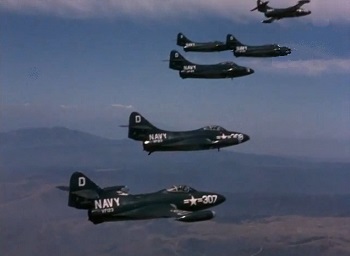 Grumman F9F Panthers in The Men of the Fighting Lady.

The Grumman F9F Panther was the manufacturer's first jet fighter and one of the U.S. Navy's first successful carrier-based jet fighters. The Panther was the most widely used U.S. Navy jet fighter of the Korean War, flying 78,000 sorties and scoring the first air-to-air kill by the US Navy in the war, the downing of a North Korean Yakovlev Yak-9 fighter.

This page lists all films that feature a variation of the Grumman F9F Panther.