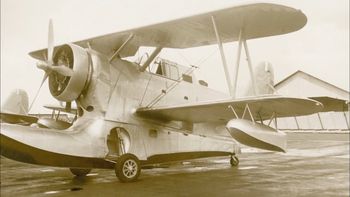 The Grumman J2F Duck was an American single-engine amphibious biplane. The J2F was used by the U.S. Navy, Marines, Army Air Forces and Coast Guard. Apart from general utility and light transport duties, its missions included mapping, scouting/observation, anti-submarine patrol, air-sea rescue work, photographic surveys and reconnaissance, and target tug. Several surplus Navy Ducks were converted for use by the United States Air Force in the air-sea rescue role as the OA-12 in 1948.

This page lists all films that feature a variation of the Grumman J2F-5 Duck.