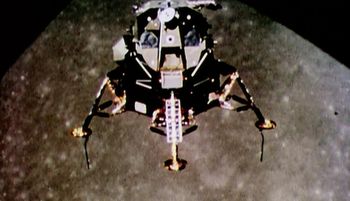 The Lunar Module -as known as the LEM (for Lunar Excursion Module)- was developed by Grumman from studies done first in the late 50's. To a request made by NASA in 1962, nine companies submited their project and Grumman won. Think to be on the very top of the Apollo Saturn rocket, the Apollo LM (another usual name of the concept) has two modules, a descent one used to land on the moon and an ascent one to take off and make the Lunar Orbit Rendezvous to dock to the Command / Service Module before coming back to the Earth.

This page lists all films that feature a variation of the Grumman Lunar Module.