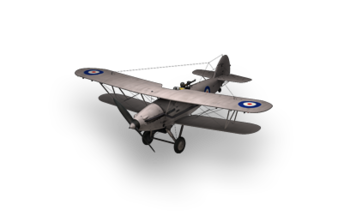 The Hawker Demon was a fighter variant of the Hart light bomber. It was developed as when the Hart entered service. While the Hawker Fury offered better performance, it was expensive and was only available in small numbers, so when a fighter version of the Hart was suggested, the Air Ministry selected the type as an interim fighter until higher performance dedicated fighters could be bought in larger numbers. 305 Hawker Demons were built including 232 for the RAF. Production of the Demon was undertaken by Hawker and by Boulton Paul Aircraft at their Wolverhampton factory, where their last example of 106 to be completed was delivered to the RAF in December 1937.

This page lists all films that feature the Hawker Demon.