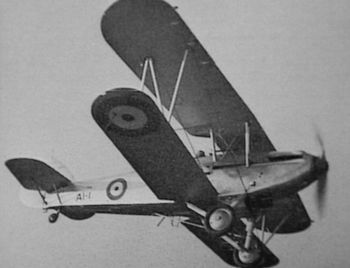 Hawker Hart seen in The Story of Aviation.

The Hawker Hart was a British two-seater biplane light bomber aircraft which made its first flight in June 1928. The high performance competed with the newest fighter and so several variant were put into production to fullfil the filed of army cooperation (Audax), Two-seat general-purpose (Hartebeest or Hardy), Hind (its own successor).

A thousand Hawker Hart were built during the 1930's.

This page lists all films that feature a variation of the Hawker Hart and their derivatives : Audax, Hardy, Hind, (navalised) Osprey, (South Africa) Hartebeest but not the Demon