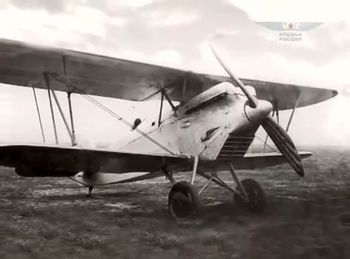 TsKB I-7 in Wings of Russia.

The Heinkel HD 37 was a fighter aircraft designed in Germany in the late 1920s, but produced in the USSR for Soviet Air Force service. It was a compact, single-bay biplane with staggered wings of unequal span braced by N-type interplane struts. The pilot sat in an open cockpit and the main units of the tailskid undercarriage were linked by a cross-axle. Soviet government bought a licence to manufacture the type, paying Heinkel 150,000 Marks for it. Manufacturing was to be carried out by TsKB, and the designation I-7 was assigned. About 135 aircraft were built.

This page lists all films that feature a variation of the Heinkel HD 37.