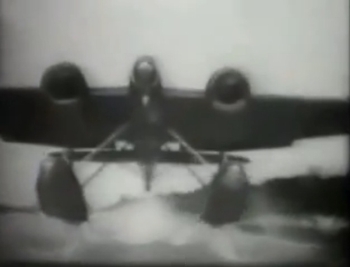 The Heinkel He 115 was a twin engine seaplane used by the Luftwaffe during WW2 for torpedo bombing and reconnaissance and minelaying and performing general seaplane duties (sea rescue or dropping agents behind enemy lines). The first flight occured in August 1937 and the type was bought by Sweden and Norway. Nerverless, most of the 138 airframes were used on all front by the Luftwaffe, their main task being the attack of allied Arctic convoys off the norvegian coastline.

This page lists all films that feature a variation of the Heinkel He 115.

Pages in category "Heinkel He 115"