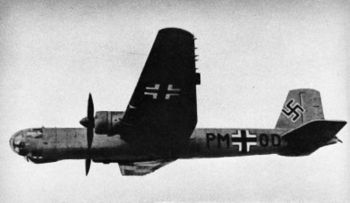 The Heinkel He 177 Greif (Griffin) was the only operational long-range bomber to be flown in combat by the Luftwaffe. Starting its existence as Germany's first purpose-built heavy bomber just before the war, and built in large numbers during World War II.

This page lists all films that feature the Heinkel He 177.

Pages in category "Heinkel He 177"